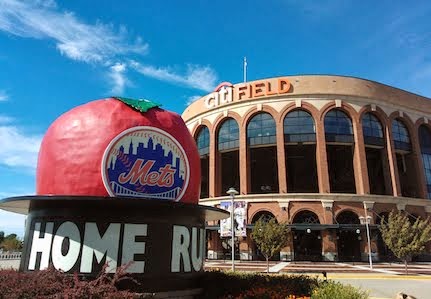 For some you probably knew what this title was about and for the rest it's the debut of Noah Syndergaard whose nickname is Thor and can understand why once you see him being he stands 6'6". I decided to use the Norwegian name for his hammer so that's where the title came from.  The Mets top pitching prospect that was part of the RA Dickey trade from Toronto along with Travis d'Arnaud.
Hopefully he can have a stellar debut and become a big piece of the starting rotation with the likes of Harvey, deGrom, and Wheeler. He struggled a little bit last year in the Pacific Coast League but seems to have found a groove this year.  He has a1.82 era and a 34/8 k/b ratio over 29 2/3 innings. In his last start he struck out 8 in 8 innings and fell a triple shy of hitting for the cycle. He's also batting .455 this year. While I don't expect that average to be anywheres near that at this level it is nice to see a pitcher who can hit.
Well Hopefull he can right the Mets ship after they dropped the first came if the series to the Cubs last night. Here is a picture I pulled off the MLB at bat app and an inception relic auto that I picked up some time ago and I'll let you decide for yourself if he resembles Thor. 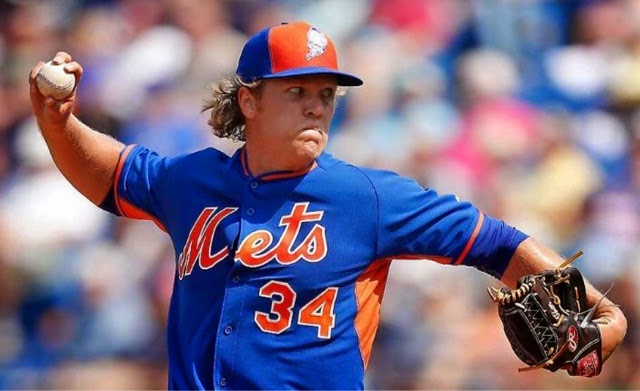 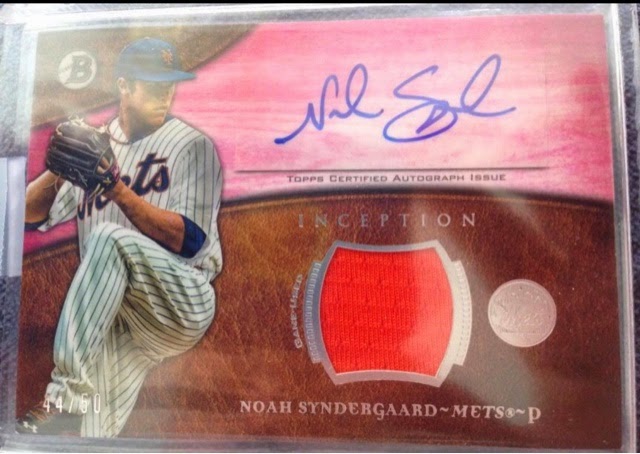 LETS GO METS and YA GOTTA BELIEVE!!!
Posted by Unknown at 6:27 PM 4 comments:

Quick post today.
Still working a ton and haven't had much time for cards. It'll probably continue like that for the foreseeable future too. I need to do some projects around the house being the weather has finally broke. In doing so and working so much that means I have to make a sacrifice somewhere and unfortunately that means my cards and acquisitions of cards will suffer. My days pretty much consist of sleep house projects work and tee ball games in no particular order.  I'll still read the blogs everyday and post when I have time. I also think a majority of this summer is spoken for with plans an vacations too.
Now I still have a few cards in the pipeline from ebay to show and continually browse ebay very quickly when time allows to see if I can score any deals. Pretty much lately the deals have been pretty few and far between in the Mets stuff. The card that I chose for this post is an on card auto that I picked up shortly after the realse of this years Gypsy Queen. If I remember correctly this is the silver framed parrallel number out of 50.   I can say so far Juan Lagares is living up to his Gold Glove award for CF and has made some pretty sweet plays so far this year. Here's the card in all its glory and I think it only set me back about 10 bucks shipped and I believe this is only his second certified auto and the first being out of this years series 1. 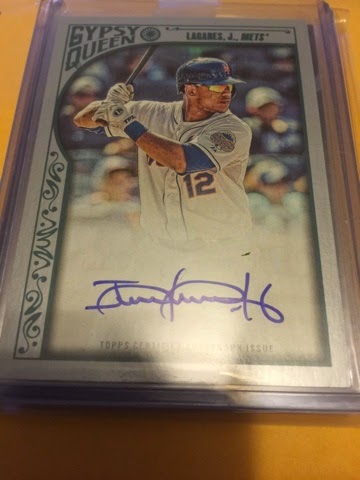 I like gypsy queen as a set but hate how the SPs are mixed in with the base set. I wish they would go along the likes of archives and put the SPs at the end of the base set. Jury is still out on this years set of ill chase it or not being I haven't seen a single base card in person.
LETS GO METS and YA GOTTA BELIEVE
Posted by Unknown at 1:31 AM 4 comments:

Just got home from a few hours of work and flipped on what channel? MLB Network of course to catch some of the highlights from yesterday's games.
How bout that video selfie by the Dodgers fan catching the HR ball.
How bout 2 games ending via baserunners being struck by batted balls. Giants beat the Angels and Dodgers beat the Diamondbacks. Last time a game ended that way was 5 yrs ago.
Well the Mets loss to the Nationals 1-0 Saturday and it was the first time they've been shut out all year I believe. Well as I was typing this post it came across the ticker that the Mets were the last NL team this year to be shutout. At least they're scoring and hitting this year so far.   Kinda curious what they do with the middle infield situation. Flores definitely has had some issues and I expected some errors but not to the frequency he's making them. Same goes for Murphy. I do believe the Mets middle infielders have a combine error total of 16 which leads all of baseball. SMH. At least Juan Lagares is still flashing the gold glove leather still this year.
Well hopefully the Mets can pull off a victory today and split the 4 game series with the Nationals and keep their lead in the NL east.
Ok ok enough about crazy POV HR catching selfies and quirky stats. It's time to show off a card. The card I selected is this 2014 Fivestar silver signatures of Zack Wheeler. Picked this one up pretty cheap being he's another pitcher to undergo Tommy John surgery. Was expecting his continued success this year after last and hopefully this little detour/roadblock doesn't prohibit or hinder him. Well enough my my rambling and babbling here is the card. 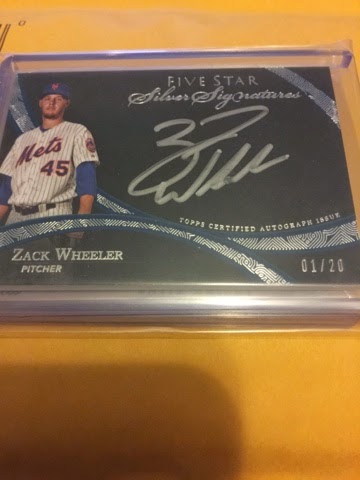 Lets go Mets and Ya Gotta Believe!!!
Lets Go Mountaineers!!
Posted by Unknown at 3:20 AM 2 comments:

I Took it Easy on Them

Well today I had some free time and made it to the post office. So if you live in the following zip codes keep an eye on your mailboxes.
79407
16933
85338
95119
06390
60856
I've been keeping an eye on ebay trying to acquire some new Mets stuff. I have been able to get some new stuff and have found sound deals on stuff that is a few years old.
Here's a triple threads from last years set of David Wright that I was able to pick up a few weeks ago for pretty cheap. Curious to see how he performs once he comes back from the DL. I'm hoping his offensive performance can get back on track after two down years. 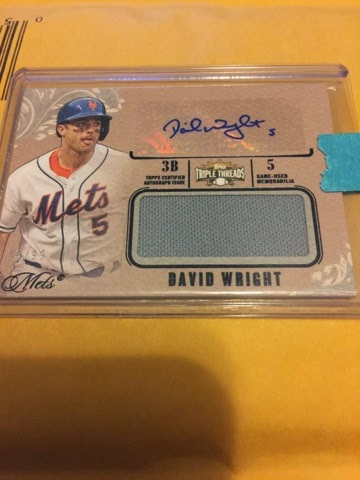 LETS GO METS and YA GOTTA BELIEVE
Posted by Unknown at 1:47 AM 2 comments:

Help it's the Attack of the PWE and a Group Break

Well as most of you can guess from the title that this post will feature some cards via a Plain White Envelope and the one that seems to keep bombing me is the gracious Jeff from over at 2 x 3 heroes.

First let me pimp a Nachos Grande break. This break features a box of 2015 Gypsy Queen, Museum, Opening Day, Museum, Bowman Chrome, and Draft Kings. So head on over to here and check out the teams remaining. Still a bunch of good teams left Dodgers, Yankees, White Sox

Now we return to are regularly scheduled post. Jeff from over at 2x3 Heroes sent me 2 PWEs, one fairly recently and the other a few weeks back that I've been meaning to post.  Well life got into the way and I've combined the 2 into 1. He sent a bunch of nice stuff an color and below is just a small sample of what he sent.

First up is a first career HR manu relic of David Wright from this years Series 1 and who looks to be coming off the DL in the very near future. 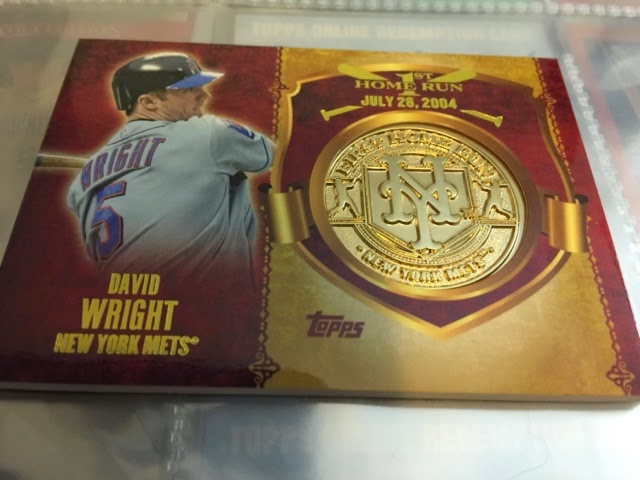 Next up is some shine of Matt Den Dekker with the Nationals and a prospect of Camarena who I don't know much about. 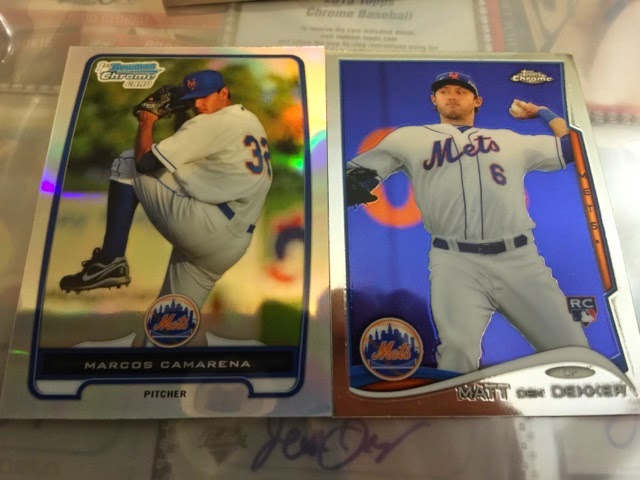 Continuing with the shine is some beautiful purple Heritage of the 2 big arms of Harvey and deGrom which is out of 566 if my memory serves me correctly along with Cesar Puello who has cleared waivers an is still with the Mets. 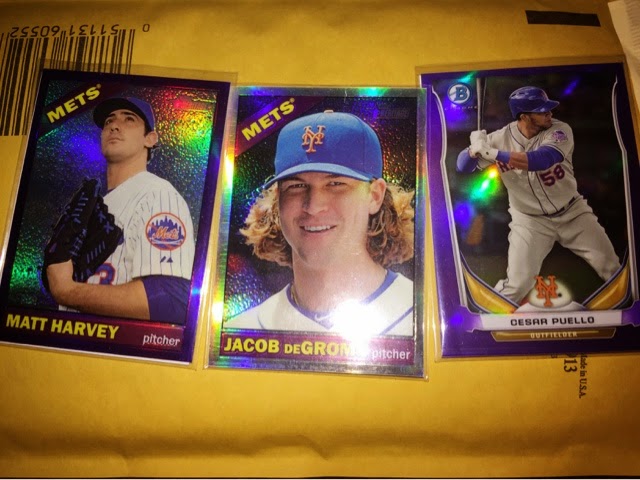 Thanks for the PWEs Jeff and be on the lookout for a envelope headed your way in the next few days.

Posted by Unknown at 2:53 AM No comments: